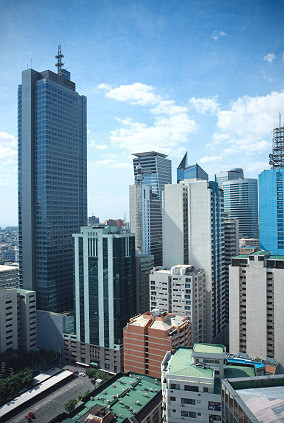 Makati City belongs to the seventeen urban centers that define Metro Manila, one of the most highly populated Metro regions anywhere. Having a population of over half a million people, Makati is rated as the 42nd most densely populated city in the world, with roughly 7,200 residents per square mile.

Makati is notable for its exceptionally multicultural lifestyle, and for it's reputation as a major entertainment center in the Manila area. Expatriates often choose to live in Makati, which has caused a large expatriate community to grow in the area with citizens from all over the world. Makati is well known also for its top notch shopping and department stores, found in the Greenbelt, Rockwell Center, Glorietta Mall, and Ayala Center. The city also also boasts the tallest building in the Philippines with the PBCom Tower.

Housing a variety of diverse national embassies, Makati is known as a significant center for intercontinental matters. But most of all, Makati stands out as the economic heart of the Philippines as well as one of several key financial, professional and commercial centers within all the Asian countries. And for this reason, and for the fact that it also houses the influential Makati Business Club and the Philippine Stock Exchange, Makati has rightfully earned the nickname and status of the Financial Capital of the Philippines.

The name "Makati" emerged via the Tagalog word kati, which stands for tide, referring to the tide of the Pasig River located to the North of Makati City.

Currently the city of Makati is among the most contemporary metropolitan areas within the country of the Philippines, and is a major international competitor in Asia.


See more of MakatiCity.com by logging in
Your online community neighborhood for Makati-area residents.
Log InSign Up
Log InSign Up
Kosmin Media